The latest features and improvements to Fable. 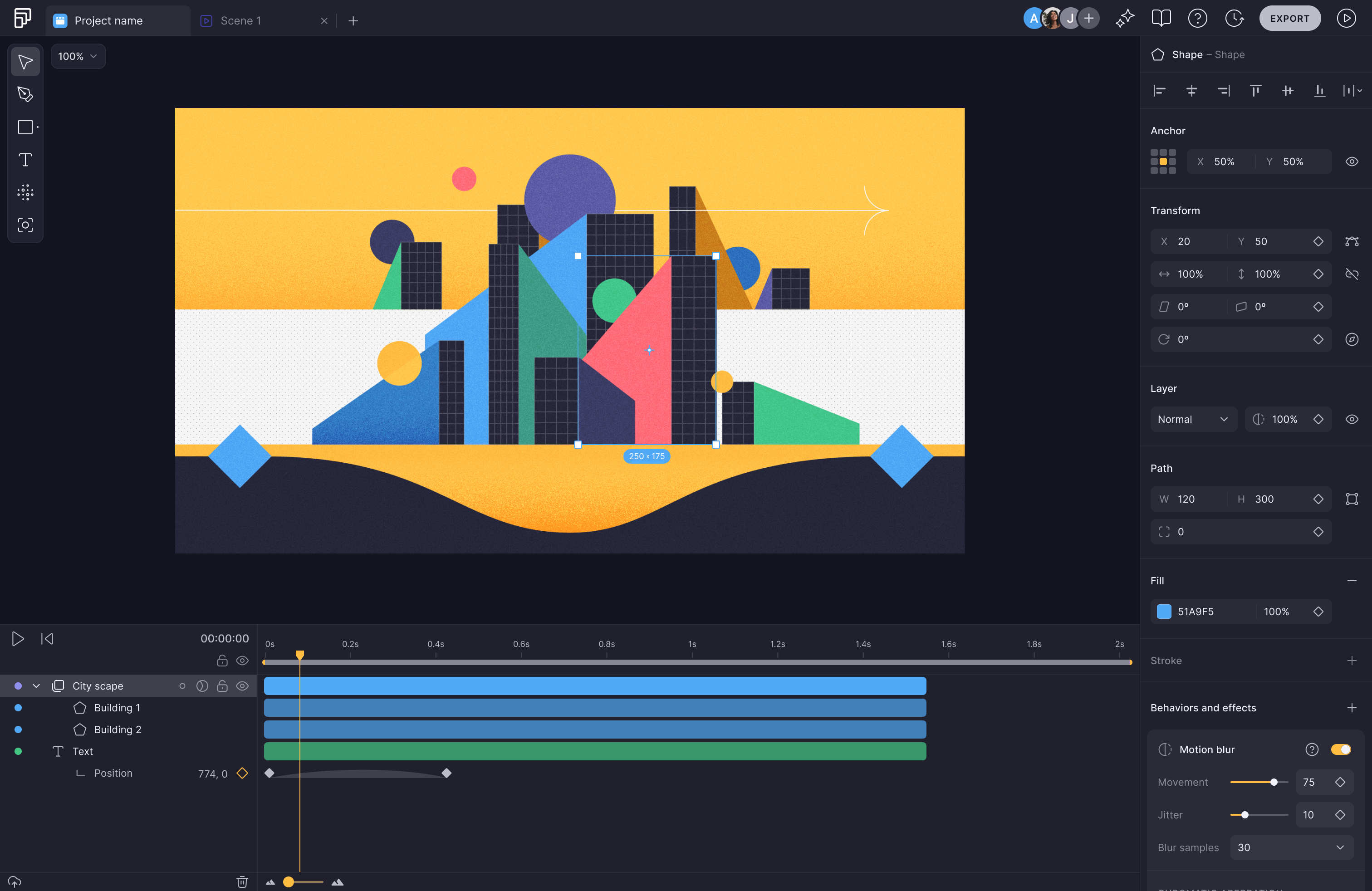 Over the past few months, our team has been working on redesigning the Fable editor experience to be more usable, delightful, and powerful than ever. Today, we’re releasing our first iteration of the design changes. We’ve decluttered the inspector, added a fresh coat of paint, and updated our design and interaction norms across the editor.

To open the Connections Panel, hover over a property on the Inspector and click the blue dot that appears to the left of the input. On the panel, you will see two fields: “Controlled by” and “Controlling.” Each field features a dropdown list of all connectable layer properties. If you click one of the listings, the properties will be connected.

This week we improved our Lottie exporter by drastically reducing the output file size. On some of our tests, file sizes are 100x smaller!

Fable has many effects and layer types, which can make it confusing to know which effects you can use in certain situations. We added a few improvements to contextualize the Effects Browser and make it easier to work with effects.

If you have any questions using effects or the effects browser, check out our effects help docs.

At Fable, we’re always looking for ways to make the motion design process more efficient for experienced animators and accessible for newer ones.

We realized there is a specific set of animations that are used on most projects. These are simple transitions and text effects such as fades, spins, and type-on effects. It shouldn’t be a lot of work to create these animations, regardless of skill level. So we set out to figure out a way to make these repetitive animations as easy-as-possible to use on your projects.

Today, we’re introducing Behaviors, a modifier that animates layers without needing to use any effects or keyframes. You can find Behaviors in the Effects & Behaviors Panel on the Editor Action Bar. These plug-and-play modifiers apply instant animations to a layer while also surfacing controls to customize the motion to your projects’ specific needs.

Our initial set of behaviors includes:

If you have a specific type of animation you find yourself doing repeatedly, let us know in our creator community, and we'll create a behavior to make your life easier. If you’d like to learn more about using Behaviors on your projects, check out our help doc on the feature.

We’re introducing the ability to orient objects to the path they’re moving in. Turn on the ‘Orient to Path’ feature for any layer you’d like Fable to automatically set the rotation for. This new feature works for any layer in your project that has position keyframes.

With Orient to Path and Position Paths, you’ll be able to create complex position + rotation animation without needing many keyframes. For example, the animated GIF posted above is created with just 2 position keyframes.

To learn more about how this feature works, refer to this help article.

While in either editing mode, click + drag to create a marquee around the points you’d like to edit. With multiple points selected, you can drag any selected point to transform the entire selection.

Today, we’re introducing position points and a new position path editing mode that gives you full control over the shape your layers move without affecting the timing of your animation.

Position paths are the lines displayed on the canvas that represent the path a layer follows between two position keyframes. Previously, it was very difficult to create complex position animation because you were limited to editing the two endpoints of the position path.

Today, Position Path Editing Mode unlocks the ability for you to animate layers in any shape you’d like, by allowing you to add interstitial points to your path without affecting the timing or interpolation of your existing keyframes.

To enter position paths mode, select a layer that has position keyframes and use the 'Option + Enter' keyboard shortcut. The editor UI will display a blue flag on the inspector, indicating that you’re in position path editing mode. While in this mode, you can add/delete position points and edit their bezier curves. The points you create do not add new keyframes to the timeline, allowing you to control the smooth animation of your layer with the original keyframes.

Animate layers in any shape with position points and position path editing mode. Learn how to use Position Path Edit mode here.

Align layers as a group

Gradients are dynamic on Fable! Now you can animate gradient swatches and gradient modes for shape fill and stroke properties on your projects. To get a refresher how the color picker and gradients work on Fable, check out this help article. 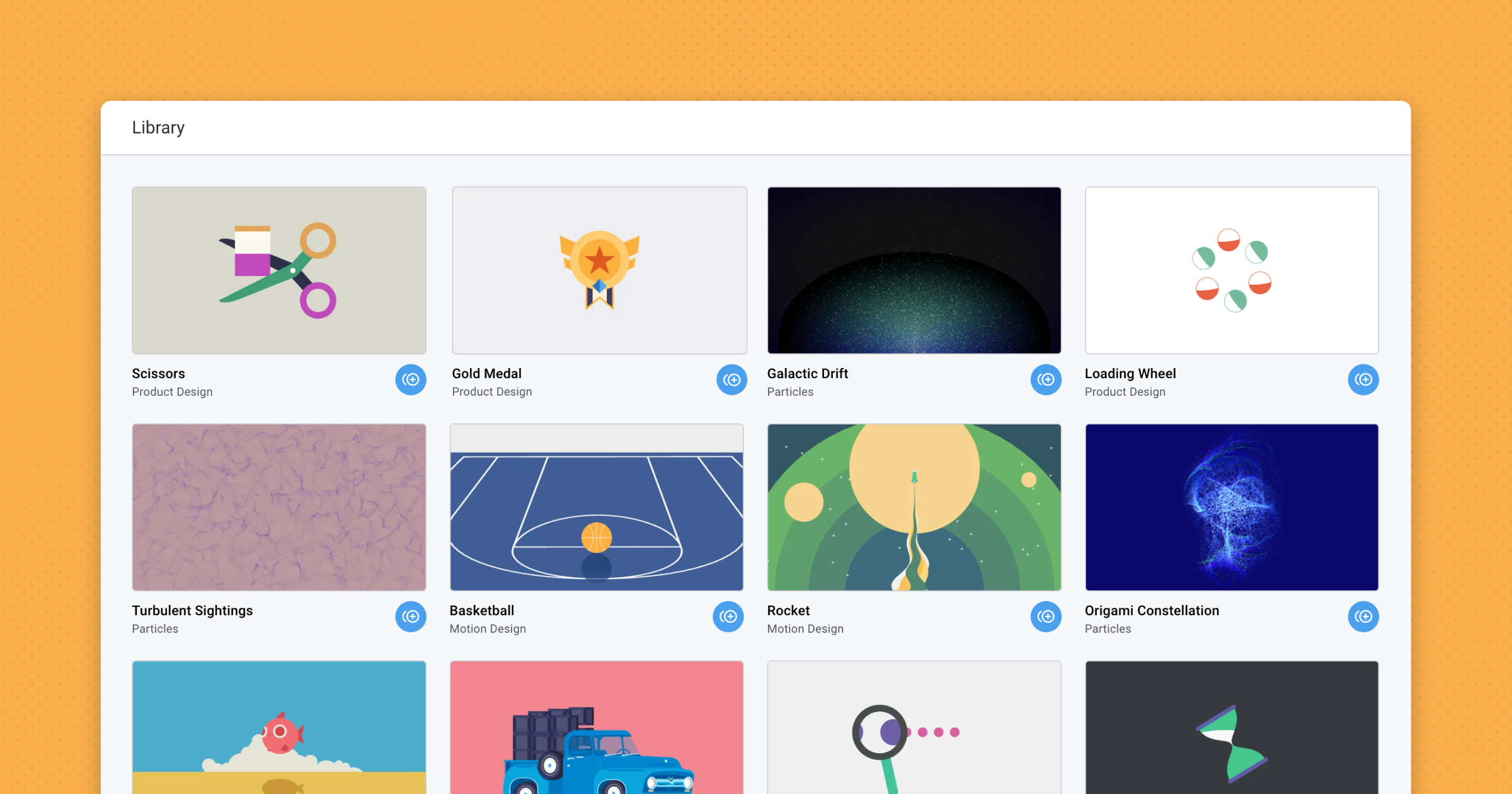 The Fable Library is a collection of starter files available for all Fable users. The Library is the perfect starting point, whether you’re creating your first project on Fable or looking to remix a file for one of your own projects.

You can navigate to the Library by clicking the bottom left sidebar of the project dashboard. Once there, click any starter project to get a personal copy that you can edit to your specific needs.

Teams are the cornerstone of collaboration on Fable. With teams, you and your collaborators can stay fully up-to-date on the latest versions of your Fable projects. Everyone stays in sync and can view changes in real-time.

For a walkthrough on how to create teams and invite others into them, checkout the following help articles: 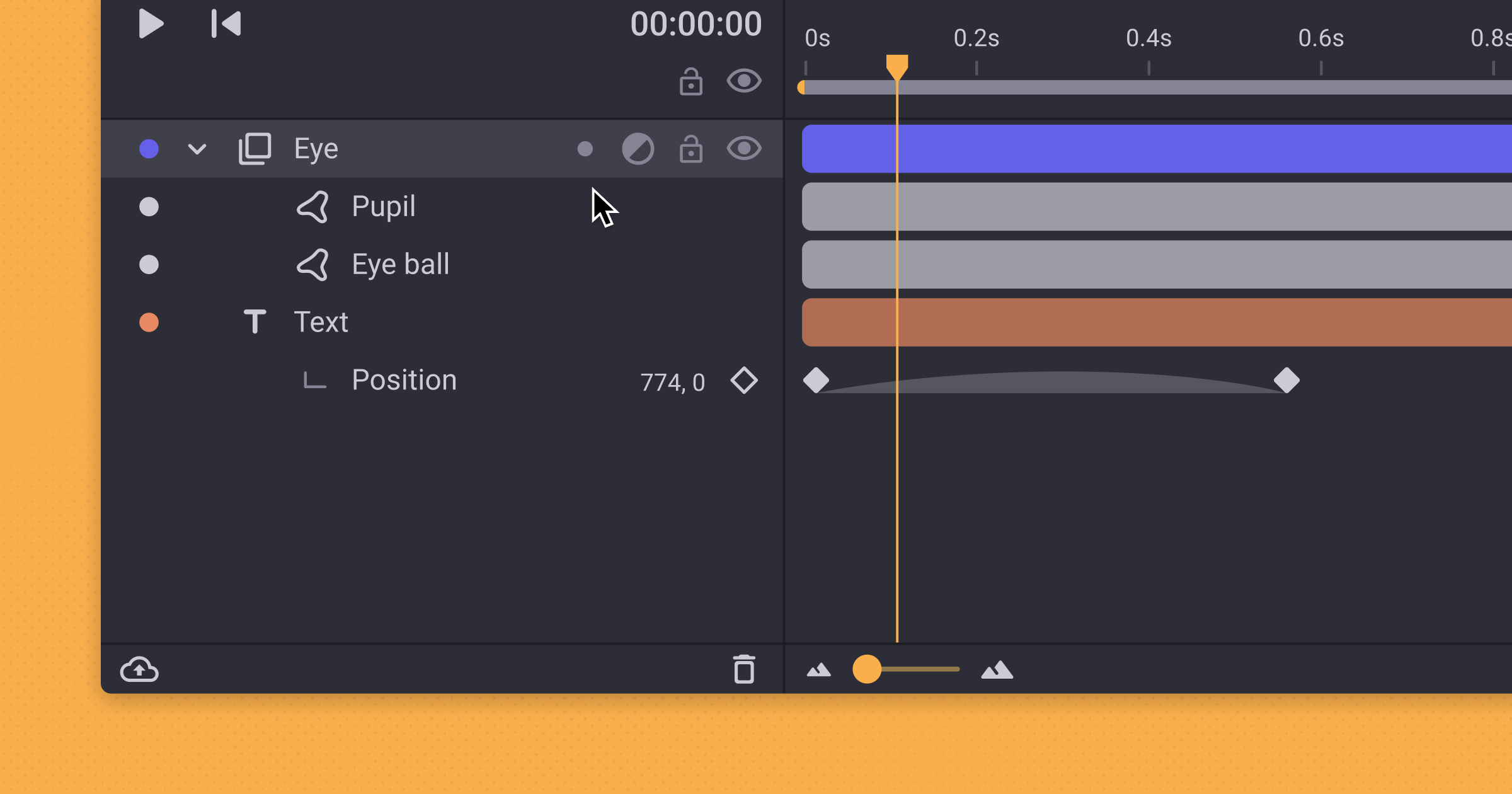 This week, we made a few improvements to the timeline that will increase your productivity in Fable! 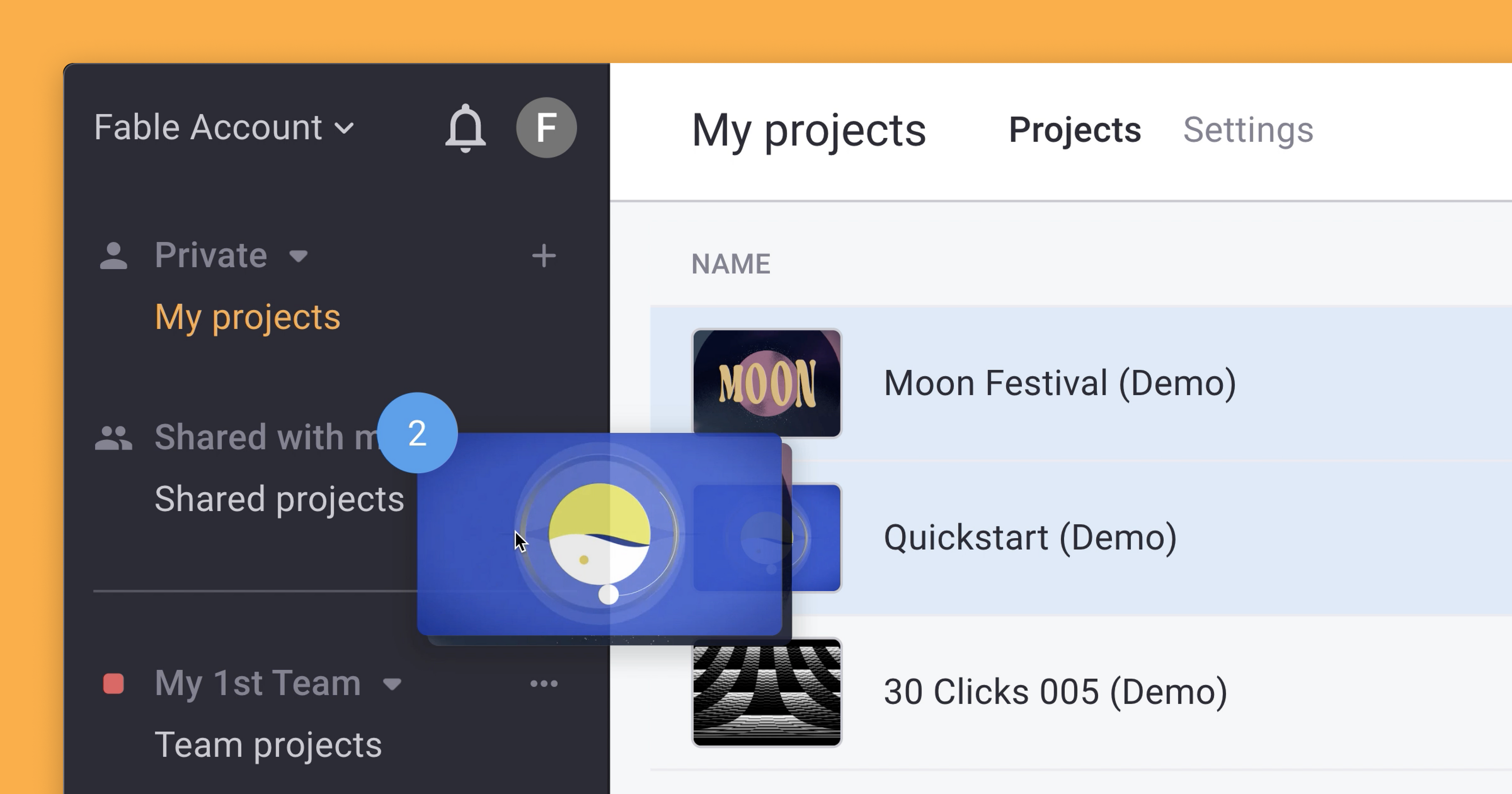 The dashboard’s Grid and List view now support project drag-and-drop and context menus. Drag and drop any project(s) into another folder within the same team, within different teams, or within private folders. Additionally, right-click on a project to open in a new tab, duplicate, rename, or delete it. 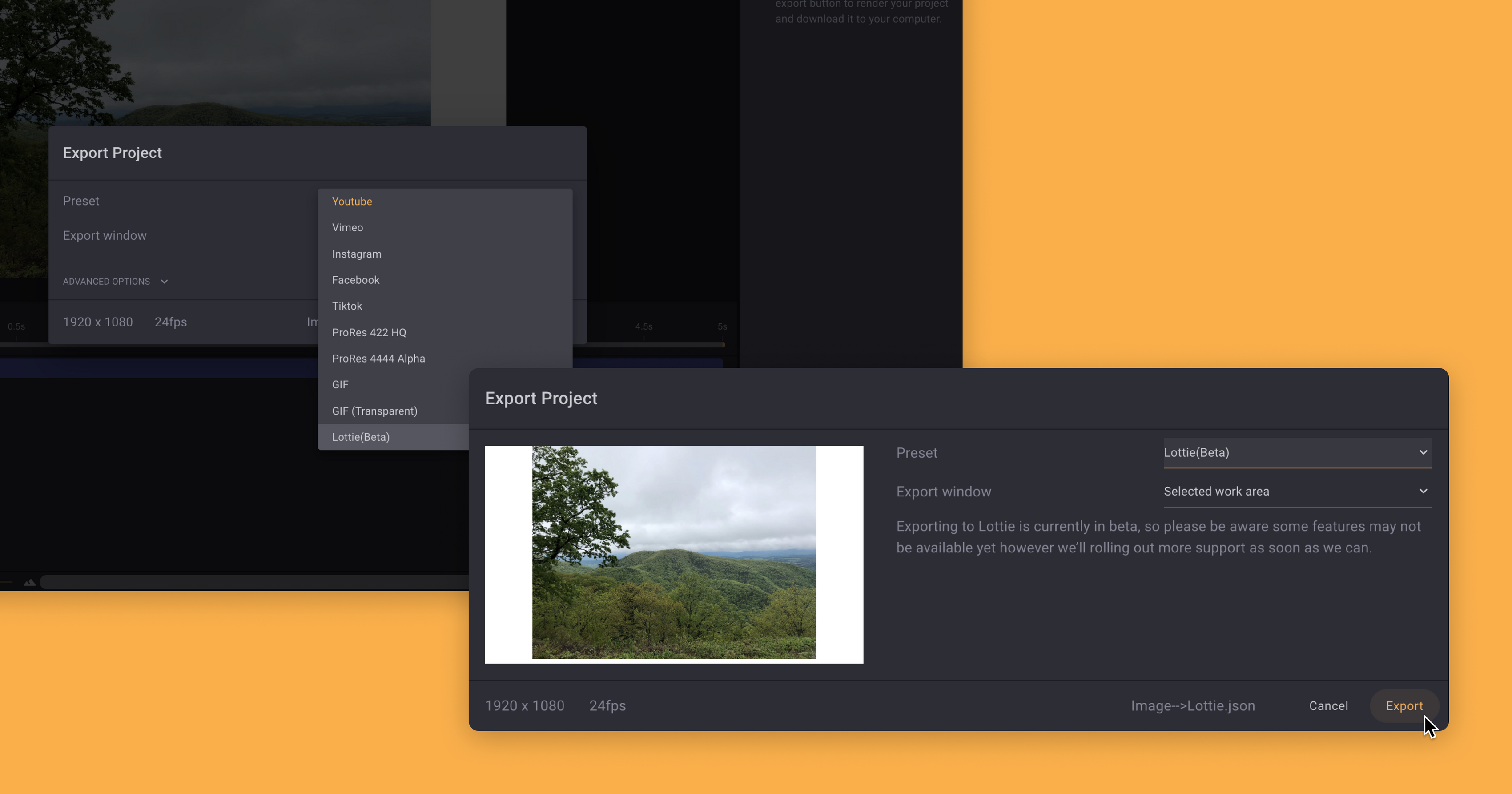 We introduced support for image files on Lottie export to expand your customizing capabilities. Incorporate images as animation or static background to personalize your designs.

View important information about your projects and assets - in one place, and in real time. The Project Info Panel displays who has access to your projects, when a file was created or edited, and which of your teammates made recent changes.

No Wi-Fi, No Problem

We have all been there, in the middle of a web-based project that times out with, shall we say, unfortunate results. If you lose connection mid-workflow, there’s no need to worry. Keep your browser window open, and your project and all its changes will save when you reconnect.

Project previews are an efficient addition to your Project Dashboard. Hover over a project thumbnail to activate a preview of your project, directly on the project card.

The Project Dashboard updates in real-time, so you can quickly see changes made on projects or new projects that are created by your teammates.

Learn more about previews and the Project Dashboard here. 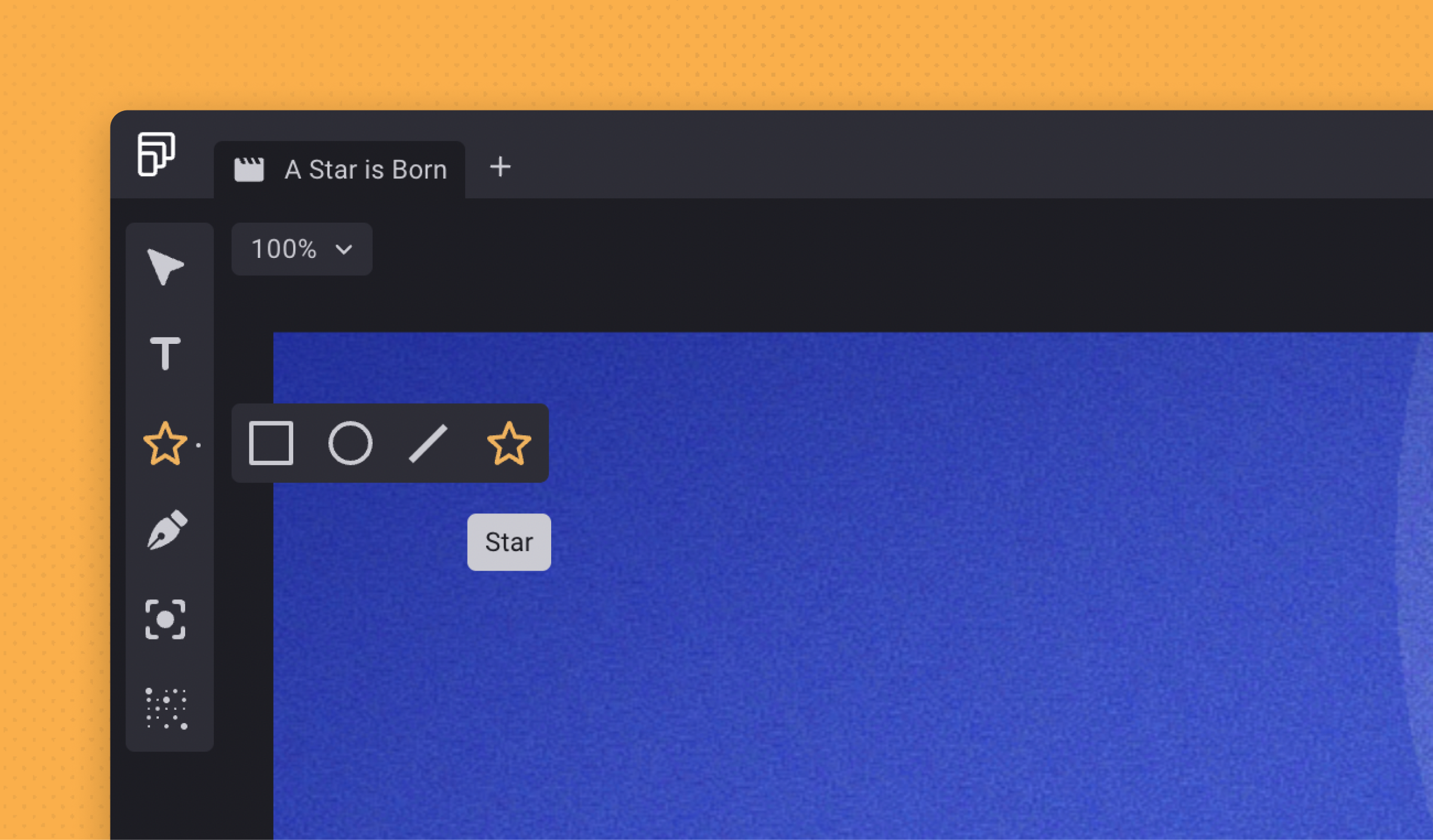 Seamlessly transfer editable layers from Figma to Fable with just a few clicks. All complex components and frames are supported so you can create in Figma and animate in Fable. Preserved layer names and groupings help maintain your organizational workflow across platforms. The Figma Export plugin is free and available to all Fablers via the Figma Community.

Fable Teams for Everyone

Today, we've released a major upgrade to the Fable workspace: Now, anyone can invite their entire team to organize, share, and work together on projects in Fable.

Check out all of Fable's plans here and learn more about collaborating on the Starter plan here. 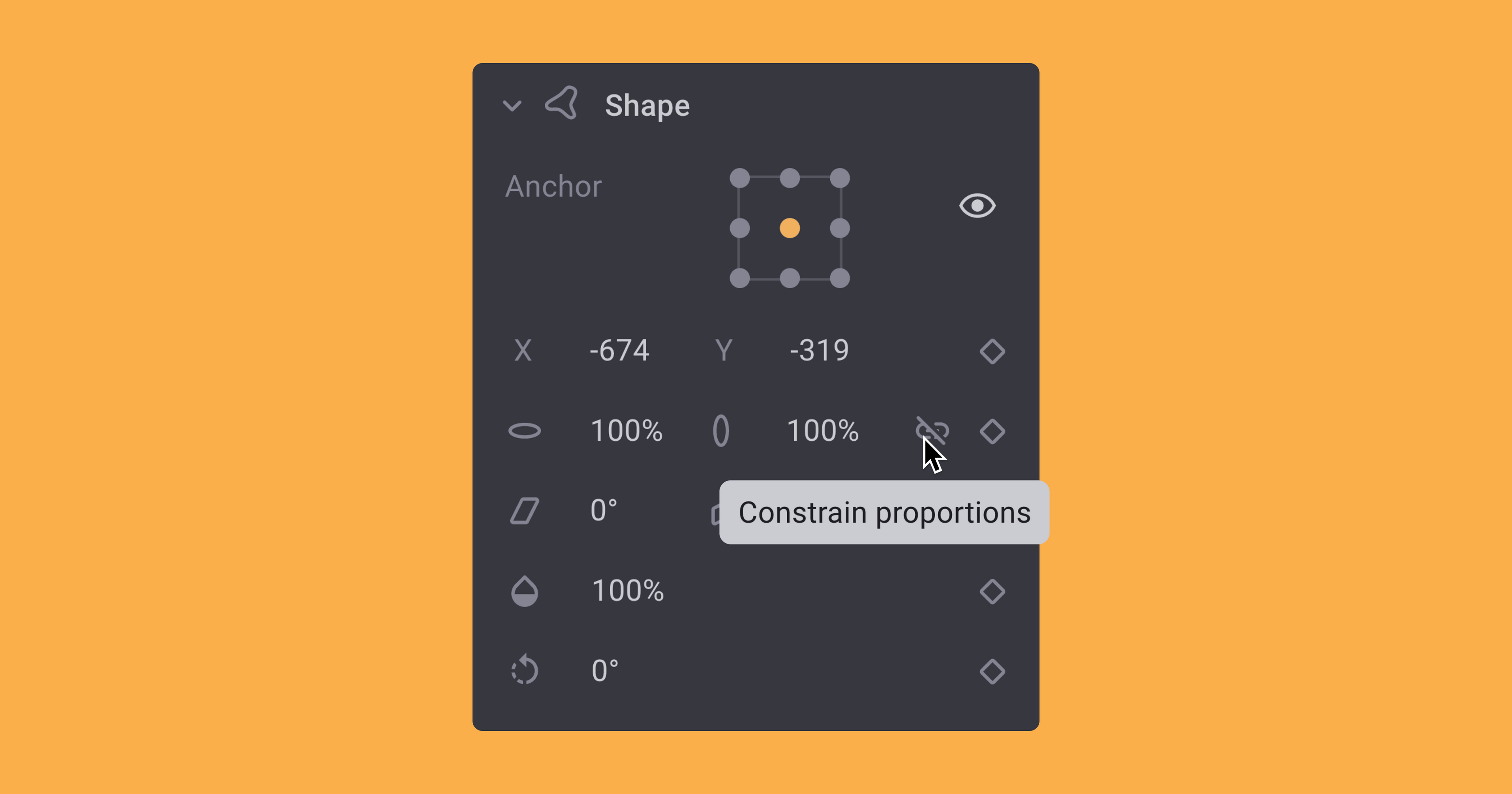 Lock, hide, expand, and collapse multiple layers all at once. Master these tools within the Layers List to focus in on parts of a project, speed up, and organize your workflows. 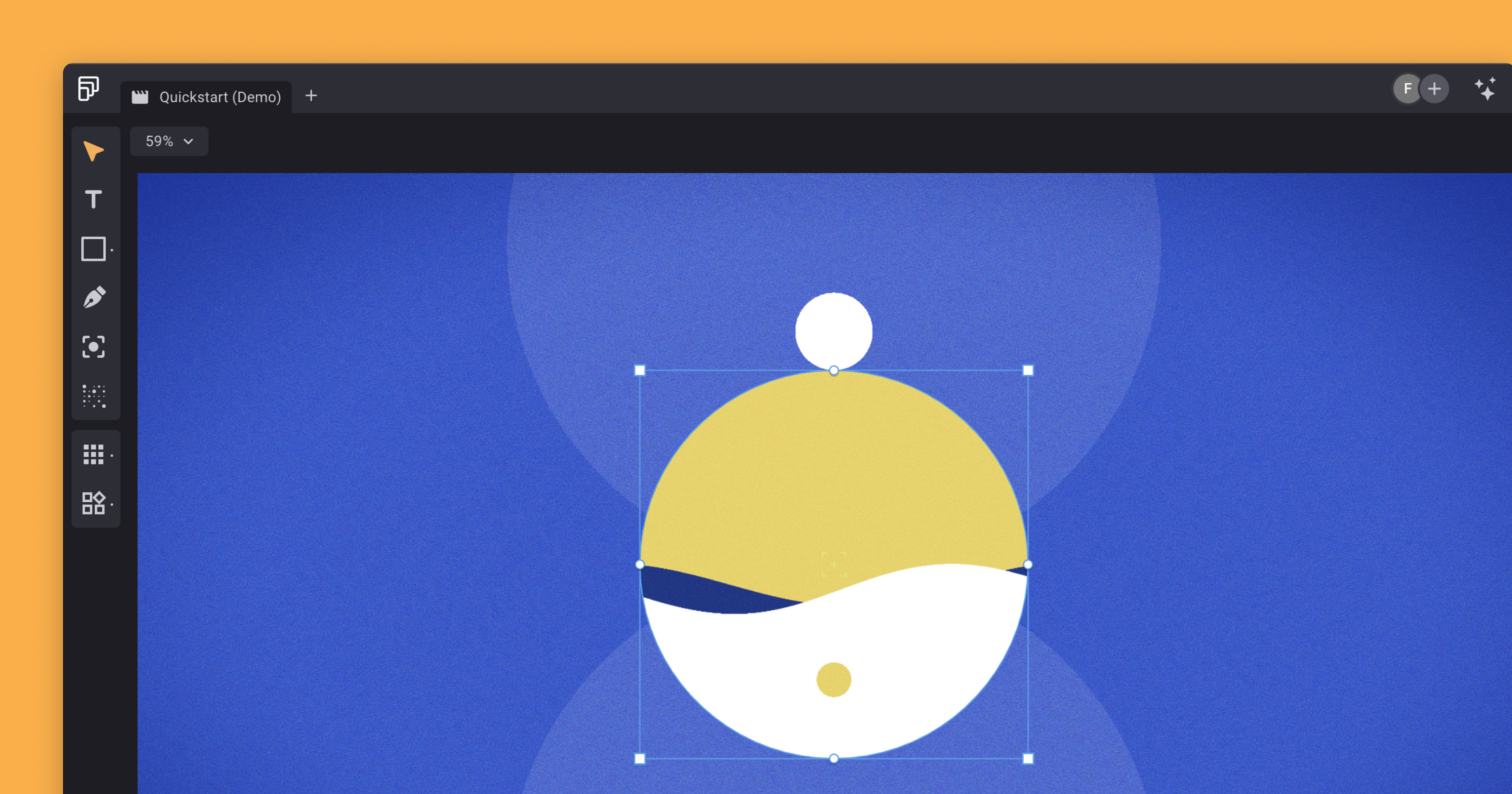 Layers with adjustable width and height are now indicated by a centered dot on each side; use the dots to adjust size property rather than scale property, and better maintain shape features. 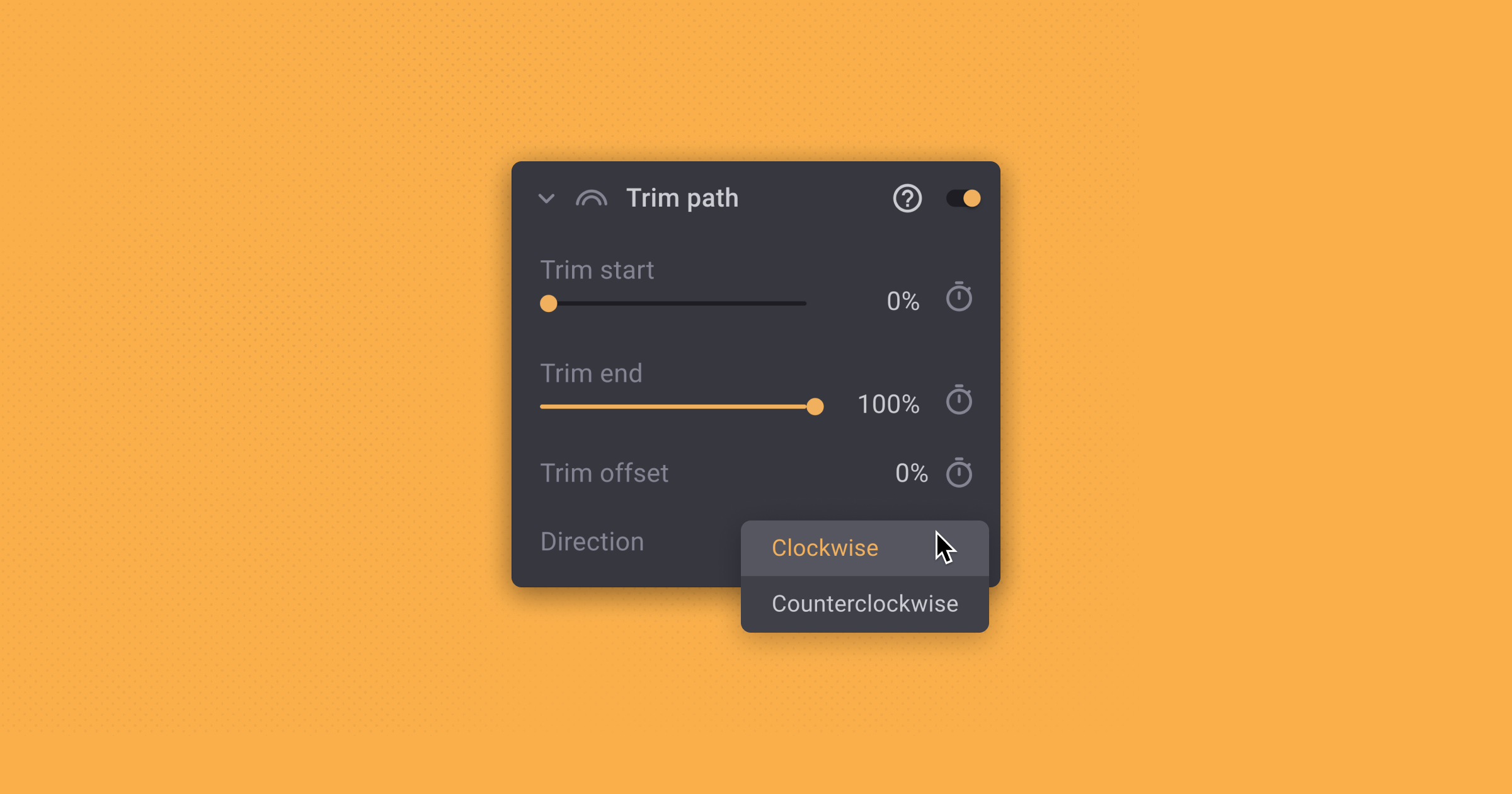 We just added the ability to flip the direction of the Trim Path effect with a clockwise/counterclockwise toggle.

We recently revamped the Effects Library and are excited for you to experience it. Find effects easily with the search bar up top. Browse all categories by scrolling up and down, or bounce around more quickly with the category list to the left. The graphic thumbnails preview each effect–hover over an effect and its ⓘ icon to learn more. Drag an effect easily into your workspace to further explore its features and see it in action!