How do you Storyboard for Motion Graphics & Motion Design? 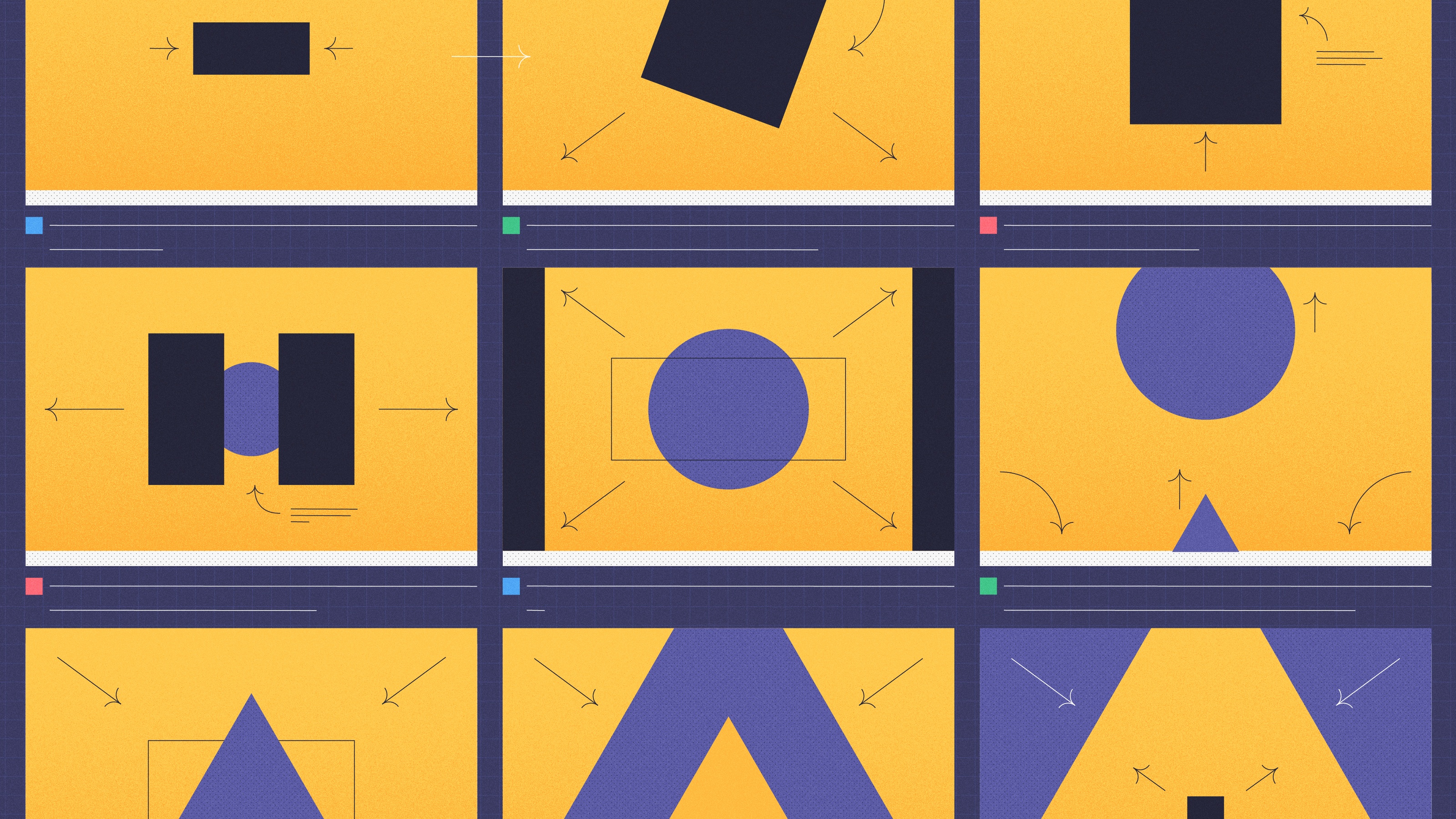 There’s a special magic to seeing a motion graphic come together when all of the animations work seamlessly to paint a picture, tell a story, or just delight you. Turning a simple idea into a work of art takes time, skill, and experience, but the building blocks are often the same. For many motion designers, their creative ideas start to turn into something tangible at one key phase: the storyboard.

A storyboard for motion design is not exceptionally different from storyboarding for any other medium, whether you’re shooting a different kind of animation or a live action music video. In this article, we’ll go through what a storyboard is, why it’s important, and even walk through some examples, so the next time you’re ready to make a motion graphic, you’ll have all the knowledge you need to draft your boards.

The Story Behind Storyboards

So what is a storyboard anyway? Storyboards are handy visual references that filmmakers of all kinds sketch out to roughly outline what an audience will see in their work. The sketches are intended to be linear – showing the sequence of events that a filmmaker is looking to create the next time they go behind the lens—or in the case of motion designers, behind the desk.

Storyboards aren’t generally the first step of your creative idea, but rather follow quickly after a scripting phase. Whether you’re working with a screenplay or a treatment of some kind, boards are built from the narrative to begin to see how the words come into play as we incorporate visuals into our story.

You likely won’t be surprised to learn that the art of the storyboard started at Walt Disney Studios. Given that the historic animation studio is credited with establishing such things as the principles of movement which guide all of motion design and animation, Walt Disney Studios are seen as the real originators of the process that we all use today. That process started on a 1933 Disney short film entitled Three Little Pigs, chronicling the famous children’s fable.

In this film, Disney animator Webb Smith is said to have sparked the notion of storyboarding by suggesting that the team pull together a sequence of detailed drawings on sheets of paper and pin them up to a bulletin board. In essence, the modern storyboard! As this step in the process became more advanced with the evolution of Disney characters and more involved storylines, the studio began to hire and train artists specifically for a storyboarding department. The process quickly spread beyond just animation: live action feature films like Gone with the Wind were storyboarded to understand and achieve a vision long before the director ever called “ACTION!” on set.

How Creatives Use Storyboards

The overall goal of storyboards is to establish the visual narrative of your piece. A script or a treatment helps give voice to the actual story, and elements like scene descriptions go a long way in painting the picture in the reader’s mind, but the storyboard can really showcase the creative’s point of view and unique take on any given story.

Storyboards are also a key part of the process when there is more than one creative involved. By seeing the story before them on sheets of paper, whole teams can align on the narrative being told and confidently move on to the next step of the process – which often means getting into the actual production. Storyboards often cut down on reshoots or time-consuming rounds of feedback because of the alignment they provide during the pre-production phase.

Because motion graphics are sometimes created for clients, this alignment piece is always key. For non-creatives or people without a design or filmmaking background, scripts or treatments can be hard to extrapolate into a visual world. The storyboard might be the first time that the vision you’ve outlined is really clicking for them. In this way, storyboards are key in taking a client along the journey of your motion graphic, and can make for a smoother final delivery.

Feeling ready to storyboard? The best way to think about getting started is to envision each element of your script or treatment down to the single frame. This may sound tedious, but it’s what makes for the most successful storyboards. What are the key frames in your story that help paint the picture? What are the stylistic choices that you can make when illustrating those (either by hand through pencil and paper, or with software) that can help articulate your vision clearly as you move along the production process?

As we’ve just discussed, storyboards show the sequence of events within your narrative in a linear way so that the creatives (and anyone looking) can understand the visual story being told by the motion graphic.

It’s important to bring your own style as a motion designer into every phase of the production process, but design also has its own dedicated phase within the process called style frames. While style frames define art direction and tone, they are a distinct and different part of the process, but serve a similar goal of helping outline the visual world of your piece and achieve alignment from any stakeholders in bringing that piece to life.

Style frames (and the mood boards that give rise to them) often come before the storyboarding process. While these two pre-production deliverables are not always used in every motion graphic, a storyboard is an absolute must so you understand the essential flow of your piece and how the sequence of events work together.

Where storyboards are a sequence of events, style frames are simply used to indicate the art direction of your story. Think of them like a more evolved mood board. Where mood boards may pull reference from many sources to help convey the overall look and feel of your motion graphic, the style frames get more specific and dial into some of the actual elements that will be incorporated into the work – from specific typefaces used if we’re incorporating lettering, to understanding the color story of our piece.

Now that we firmly understand storyboards, where they fall in the process, and how creatives use them, let’s take a look at a few key examples that can help set you off on your storyboarding journey.

Understanding what storyboards are for motion design is one thing, but seeing them in practice is another. Let’s take a look at a few examples to understand how we bring a concept to life through storyboards, and see the results of our storyboarding labor in the final motion graphic! 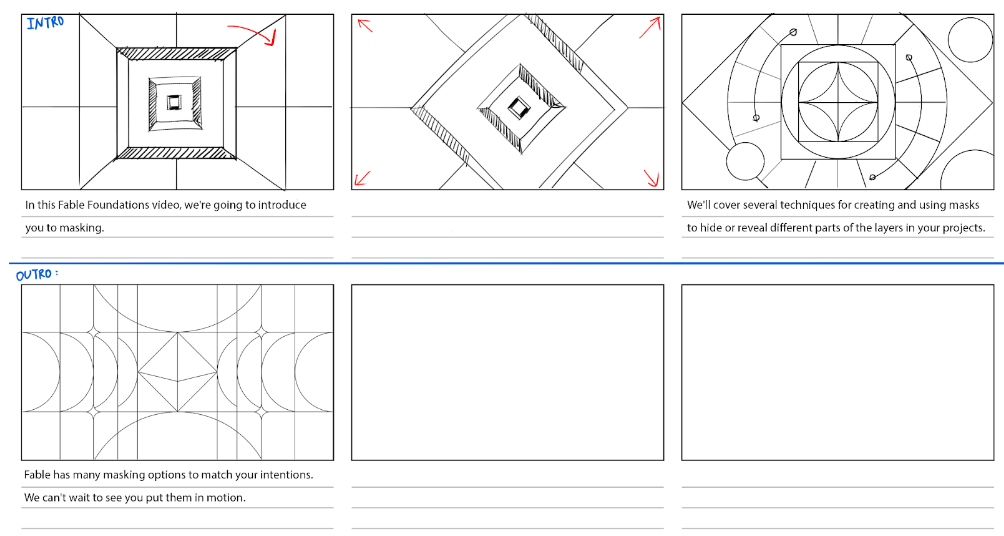 In this motion design storyboard, we see that the motion designer uses a template to sketch out their key frames. The boxes showcase what the viewer will see on screen, and the underlying text helps establish that context and can speak to any V.O., music, or other written/spoken story that is told. 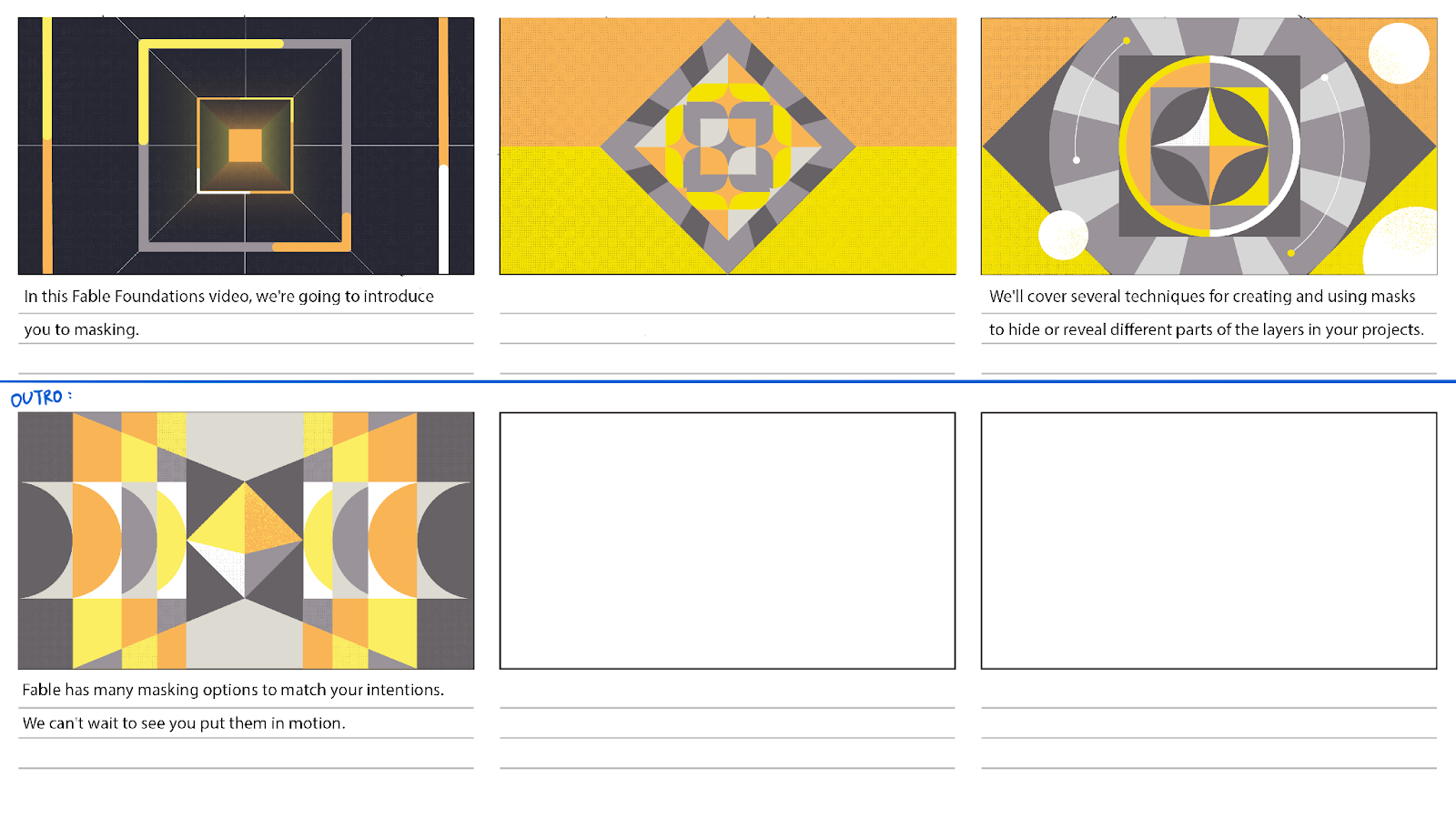 This next storyboard shows the exact same story in our first example, but now we’re beginning to see the stylistic elements brought in to help give us a clearer picture. Seeing the frames in fuller fidelity by adding our colors establishes a clear design perspective and allows us as viewers to understand the world of this video that much easier. You can imagine that if the motion designer was creating this animation for a client, they would have a much better sense of what the final product would look like after seeing these frames. 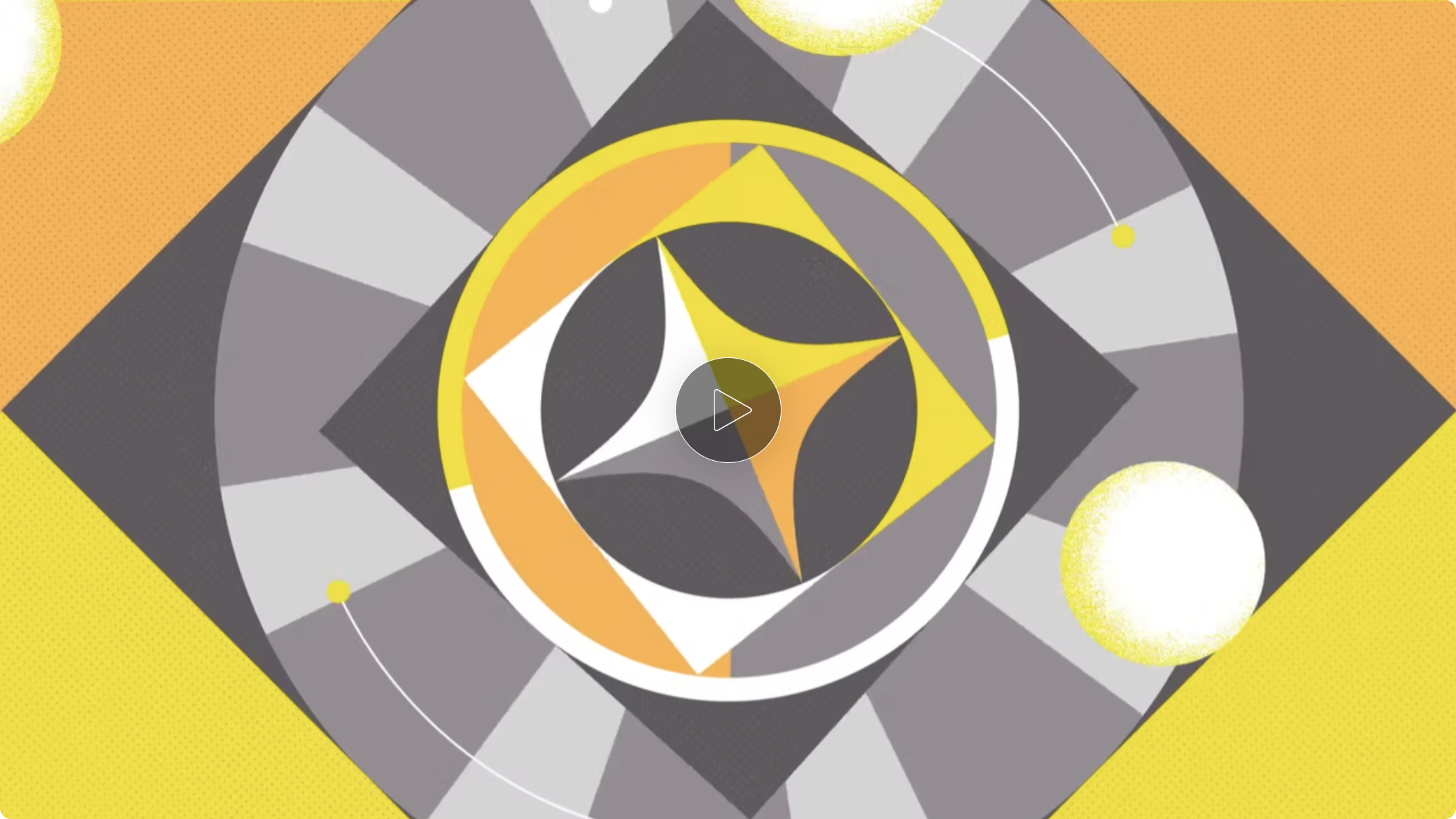 Click to view the Masking tutorial in Fable Academy.

And now the reveal. In the final result, we see how well these elements come to life through the power of compelling motion design, but the product itself is not a huge surprise. While the movements are delightful, we understand what we’re going to see because we’ve been well primed with the storyboards that took us on the journey of rough idea through to final motion graphic.

Let’s walk through another example motion graphic from the Fable Academy to see storyboards at play. 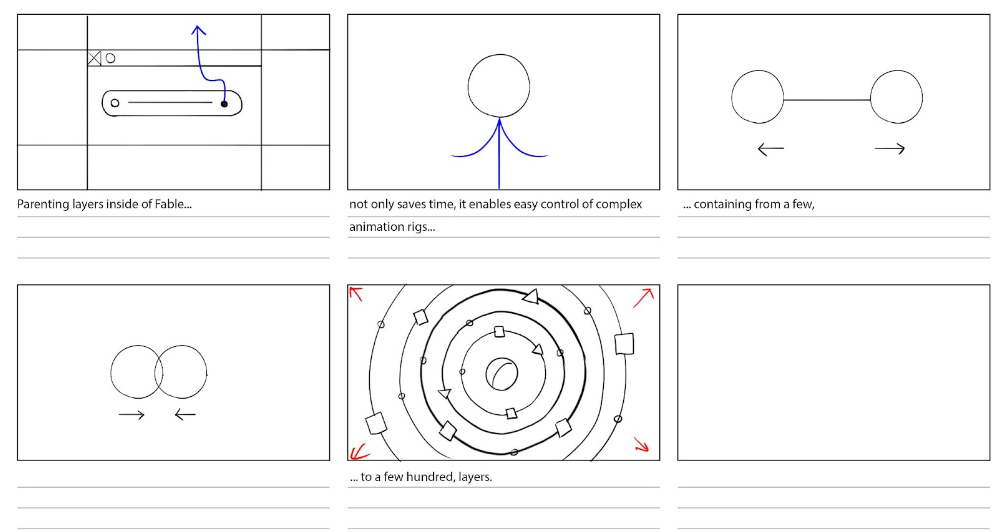 In this example, we see the motion designer using rough sketches to outline how they want to tell the story of parenting. We’re using shapes here to show the story, and the motion designer indicates movement of those shapes as we’ll see in the final result through the use of those black and red arrows in frames three, four, and five. 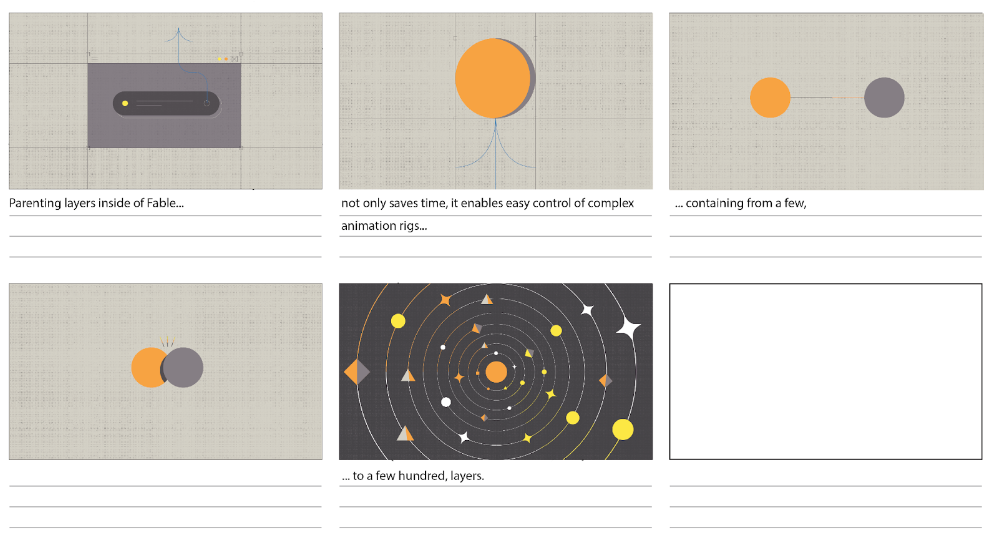 Now, with our colors layered in, we can not just see the linear story presented before us, but get a better feel for the space we’re playing in. Understanding that the gray backgrounds with poppy yellowish orange and dark gray give us focus to our circular subjects, and when we then move into our black background solar system-esque world, we understand the limitless and expansive possibility, as described through voice-over. 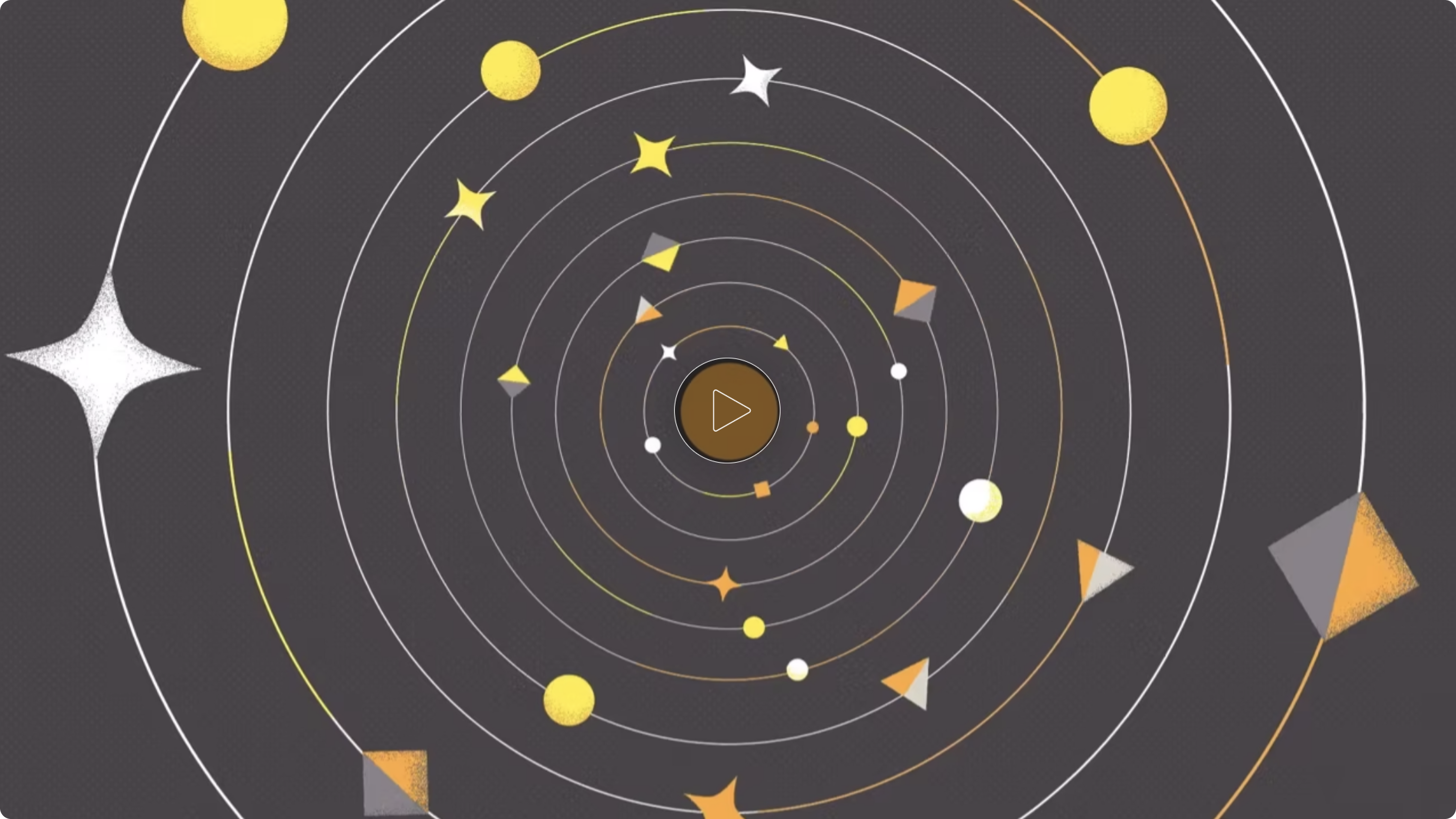 Click to view the Parenting tutorial in Fable Academy.

In the final result, these storyboards are brought to life in a delightful way. We see the motion of the circles coming inward and outward as indicated by our arrows in the sketch phase, and understand the specific parenting abilities and grander potential that we gleaned from our colored-in version of our storyboard in phase two.

Ready to take your ideas to the board? Now that you understand what storyboarding is, a bit about its history, and have seen some key examples from idea through to result, it’s time to turn your motion design idea into a motion design storyboard.

Types of Animation: A Guide for Motion Designers